The first ever Wycombe Business Expo, held on October 28th, turned out to be quite a success! The event, which took place in the magnificent surroundings of the new Cressex Community School, opened with a networking breakfast for exhibitors, which was addressed by Local MP, Steve Baker; National Chairman of the Federation of Small Businesses, John Walker; the Leader of Wycombe District Council, Lesley Clarke; and the Chairman of Wycombe District Council, Bill Bendyshe-Brown.

The Expo was open to the public from 10:00 – 17:00 and there was a steady stream of visitors throughout the day. I’d like to thank everyone that dropped by my stand. We had some fruitful discussions about their marketing and PR challenges, particularly marketing for SMEs with limited budgets. And I also had some great discussions with fellow exhibitors.

In the evening, I joined about 90 other attendees at the Expo Black Tie Dinner, which featured John Salako (Ex-England Footballer, turned Company Director) as guest speaker. This was held at Adams Park, the home of Wasps Rugby Club and Wycombe Wanderers. This provided an opportunity for people to relax, enjoy some good food and wine, and even dance to the disco. 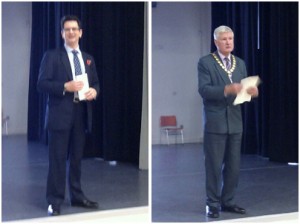